The event was held for the first time in 1996 – when it was called simply Salone del Gusto – and has evolved over the years, widening its scope and furthering its analysis, until it became Terra Madre Salone del Gusto, the largest international event dedicated to food, the politics of food, and the environment.

How did we get here?

1996 – The first edition of Salone del Gusto is held in Turin at Lingotto, once the largest automobile factory in the world. Coming ten years after the foundation of Slow Food Italia, this was the event that launched the association’s flagship Ark of Taste project, as well as one of the cornerstone activities of all future events, an innovative mix of food education and dégustation: Taste Workshops. Though smaller than future editions, this event marked the birth of the first fair dedicated entirely to small-scale food products and producers.

1998 – Salone del Gusto returns with a new formula centered on the market place, a meeting point for food producers and eaters, which occupied the entire exhibition area at Lingotto. Here, the first Italian products to have boarded the Ark of Taste were presented. The international nature of the event was reinforced by the concurrent hosting of the Slow Food International Congress, which welcomed some big names from around the world: Paul Pontallier, winemaker at the legendary Château Margaux in Bordeaux, Charlie Papazian, the American godfather of home-brewing, and renowned Catalan chef Ferran Adrià. The event was also visited by then Prime Minister of Italy Massimo D’Alena, marking an unprecedented political recognition for the country’s artisan producers.

2000 – Another flagship Slow Food project is presented for the first time: the Presidia, with 90 groups of producers from across Italy present at the event. Growing attention both from the public and the media consolidates the unique position of Salone del Gusto, an essential reference for quality gastronomy. The presence of the jurors and winners of the first Slow Food Prize for Biodiversity (held earlier in the year in Bologna) marks the establishment of a new watchword in the Slow Food vocabulary, one which informs all of our future projects: biodiversity.

2002 – Two years later, and the Presidia project has gone international, and the first projects from beyond Italy are presented for the first time, testament to the innately glocal character of Slow Food. Food education is more than ever the backbone of Salone del Gusto: each activity, tasting and conference contributes to making the event the largest “food school” in the world. Guests this year included Eric Schlosser, author of Fast Food Nation.

2004 – The growing worldwide spread of the movement, and the recently-launched Slow Food Foundation for Biodiversity, combine to launch a new, revolutionary step forward: the birth of Terra Madre, the meeting of food communities from around the world, where 5000 delegates from 130 countries meet in a “Farmers’ United Nations”, held at the same time as Salone del Gusto. The newly-launched University of Gastronomic Sciences in Pollenzo is also presented for the first time. Charles, Prince of Wales, closes the first meeting of Terra Madre and visits Salone del Gusto. Media coverage of the event reaches all the continents of the world. 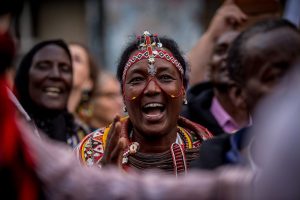 2006 – Salone del Gusto celebrates its 10th birthday, and Slow Food Italia its 20th. The event focuses on defining and spreading the message encapsulated in the title of Carlo Petrini’s 2005 book Good, Clean and Fair. The second edition of Terra Madre is inaugurated by then President of the Italian Republic, Giorgio Napolitano, as the network expands to include chefs and teachers, consolidating itself as a permanent feature of the event, and indeed, Slow Food, with around 7000 delegates present from across the world. The System Event Design project is also launched, a new vision for reduced environmental impact in Slow Food events which continues to evolve to this day. Guests this year include Michael Pollan, author of The Omnivore’s Dilemma.

2008 – The 7th edition of Salone del Gusto sets a new record in terms of visitor numbers (180,000 in total) and strengthens its bond with Terra Madre. The meeting of food communities expands to include youth and, for the first time, musicians. The event promotes itself as a “return trip” to the roots of food, in which everyone, from producers to consumers, can take part.  The 2008 edition also marks the launch of another flagship Slow Food project, the Earth Markets, which aim to bring producers working according to the Slow Food philosophy in closer contact with their communities. To date, 70 such Earth Markets have been opened in 18 different countries.

2010 – The theme of the 8th edition of Salone del Gusto was the link between food and places: a new geography for Planet Earth which offered the 200,000 visitors a unique journey around the culinary cultures of world, all within the Lingotto complex. Terra Madre, now supported by IFAD, focused its attention on indigenous peoples, leading to the creation of the Indigenous Terra Madre network within the larger organization. This year also saw the launch of a campaign to plant “A Thousand Gardens in Africa” to increase food sovereignty and protect biodiversity: food communities and Slow Food convivia from around the world heeded the call. Also presented for the first time was the Slow Food Cooks’ Alliance, started in 2009.

2012 – Salone del Gusto and Terra Madre fuse into a single event, with the tagline foods that change the world. The public meet representatives of food communities from around the world who animate the market, which now extends across the 3 pavilions of Lingotto’s Oval conference centers, where more than 1000 exhibitors from over 100 countries are present. Once again, the Slow Food International Congress is held at the same time, with 650 delegates from 95 countries present in Turin. At the Congress the Slow Food President Carlo Petrini launches a new challenge: to catalog 10,000 products on the Ark of Taste and create 10,000 Gardens in Africa – with a full-size replica of one such garden planted inside Lingotto itself. Guests included Serge Latouche, author of Farewell to Growth.

2014 – The 10th edition of Salone del Gusto and the 10th birthday of Terra Madre: this was the year that the Ark of Taste docked, physically, in Turin, with a sample of all the 2000 products on board. There was a greater focus than ever on food and taste education, with an entire pavilion of Lingotto dedicated to these themes. A new series of activities—the Cooking Schools—also made its debut in this context. More Presidia than ever were also present: 180 from Italy and 120 from 50 other countries, while the market hosted 1200 exhibitors from over 100 countries.

2016 – A unique and extraordinary edition of Terra Madre Salone del Gusto, held for the first and so-far only time outdoors, around the city of Turin, and not at Lingotto. The city’s grand central park, Valentino, hosted the market, while the central square of Piazza Castello and the adjacent Via Roma were home to Slow Food Presidia (visited by President of the Republic Sergio Mattarella), the Enoteca and numerous other activities. More than 7000 delegates of the Terra Madre network from every corner of the world and the largest-ever participation of the general public made this an unforgettable moment both in the life of Slow Food and for the city of Turin. Guests at the series of conferences at the Teatro Carignano included French politician and alter-globalization activist José Bové and Marion Nestle, author of Food Politics. A spectacular march from Valentino Park, along the Po river and up into the center of the city with delegates from round the world proclaiming with their placards “they are giants, but we are millions”, the slogan of Terra Madre which affirms its strength and oppositions to the rules imposed by multinationals and markets. 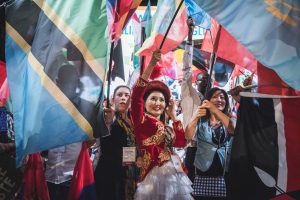 2018 –  A new and urgent thematic focus was at the heart of the 12th edition: climate change, and how food is a cause, a victim and potential solution to the crisis facing the planet. The Food for Change campaign was the unifying thread which brought together lots of new Slow Food activities as Terra Madre Salone del Gusto returned to Lingotto: Slow Travel, which started in Austria, and clusters dedicated to Slow Meat, Slow Fish, Food and Health, Seeds, Bees and Insects, and other vital issues for the future of our planet’s ecology. A new model for Slow Food was launched at the event too, as the organization moves way from an associative model and towards a more inclusive network of Communities. There was a program of events in locations across the city once again as part of the Terra Madre IN program, with conferences, dinners, theater shows, exhibitions, and activities for schools and families. Among our guests were the writer Amitav Ghosh and political activist Surita Narain, both from India, ambassadors of a popular voice against the climate crisis and the possible solutions we can enact collectively, while the actress Lella Costa and Slow Food activist Alice Waters were spokespeople for questions of gender and the need to empower women from farm to table.